The Namaste Consciousness – The New Black

Feel like venturing down the rabbit hole of delights this weekend? Or simply looking for something mind altering to watch? If you feel even a slither of excitement when you hear the terms evolution, enlightenment, positive change, the laws of attraction, and quantum physics, don your favourite blankie and uggs, get the heater cranking and a nice glass of red at hand, and read on… Whether you have an interest in quantum physics, yoga, meditation, spirituality, the greater universe or the universe within, the theory behind this movie “What the Bleep!? Down the rabbit Hole” may well blow your mind….or perhaps just confirm what you already innately know.

The possibilities are endless! Academy Award winner Marlee Matlin is Amanda, a photographer suddenly transported into a metaphysical world of quantum mechanics, odd science and mind-bending phenomena. Guided by the world’s top physicists, engineers, biologists and mystics, she tumbles down the rabbit hole and gets a first-hand look at the fascinating links between science and spirituality in our everyday lives. So, what of quantum physics or quantum mechanics?

Quantum mechanics is the science of the very small: the body of scientific principles that explains the behaviour of matter and its interactions with energy on the scale of atoms and subatomic particles.

Although the term ‘quantum mechanics’ is reasonably new in the grand scheme of things, dating back to the 1920s when it was coined by a group of physicists including Max Born, Werner Heisenberg, and Wolfgang Pauli, the concept is nothing new. The following quote, often recited in yoga classes around the world, beautifully aligns with the essence of quantum physics and the human condition, and although there is a lot of here-say about the date and origins of it, historians and Indologists have dated its roots from the ancient text, the Upanishads, back to around 400 B.C.

In a nutshell, what we think effects the world. We are the space in between spaces, all interconnected, and our thoughts, being simply a form of energy, have the potential to influence our reality and the reality of all around us. When we awaken to this “namaste consciousness” this reality that ultimately, we are all one, we awaken to our existence within an ocean of pure potentiality. We awaken to our innate knowingness that every moment is a choice that influences the next moment and the next and so forth creating the pathway to our own destinies. In the movie, “What the Bleep!? Down the rabbit Hole,” during a scientific experiment the behaviours of molecules were recorded under various conditions. The behaviour of the molecules changed as soon as an observatory eye was introduced to the experiment. How completely crazy, fascinating and cool that molecules – essentially energy – can change when under observation! This is particularly intriguing as it begins to close the gap between science & spirituality, backing up “the witness consciousness” as we call it in yoga and meditation, and the power of observation. Whether it’s the observation of molecules in a scientific experiment or the observation of our own mind fluctuations during meditation, this witness consciousness has the power to change stuff. To change behaviours, and ultimately reshape our future. In another experiment, Japanese scientist and author Masaru Emoto developed a keen interest in the molecular structure of water and what effects various thoughts, words, emotions and energies had on it. Mr Emoto became compelled toward further research when during the experiment he discovered that human consciousness had an effect on the water’s molecular structure. Emoto’s conjecture evolved over the years, and his early work explored his theory that water could react to positive thoughts and words, and that polluted water could be cleaned through prayer and positive visualization.

With water being the most receptive of the four elements, and our bodies being made of around 80-90% water, if thoughts have been scientifically proven to have such an impact on water, we can only imagine the potential impact that our thoughts can have on our bodies, and ultimately on our lives. In the movie, ‘observation’ is said to be the crucial factor in our experience of life.

“Whatever way we observe the world around us is what comes back to us. And the reason why my life is so lacking in joy and happiness and fulfilment is because my focus is lacking in those same things.”

“If we are victims, we should ask ourselves, have I a victim mentality? If I’m continually meeting misfortunes and accidents and tragedy maybe it’s because my mentality is attune to accepting that this is the way life is and so it happens. Now why am I not achieving the things I’d really like to draw in? Fundamentally through lack of focus. Most people don’t effect reality in a consistent and substantial way because they don’t believe they can.” Research shows that the average person loses their attention span every 6-10 seconds per minute which highlights the challenge of fine tuning and honing our attention in on our hearts desires and goals.

Herein lies the evidence of why tools like mind mapping, vision boarding, yoga, meditation, and journaling can be so powerful in moving us closer toward our desired outcomes.
These tools are all contributors to an ever expanding consciousness. The question then arises, so what is consciousness and where does it come from?

There are several definitions thrown about in the movie. “Consciousness  is an awareness of the self.” “Consciousness is a by product of spirit entering dense matter.”

Consciousness Vs God. Religion is debated in correlation to quantum mechanics. Whereby much organised religion promotes separatism and hand balling responsibilities over to a greater God, quantum physics aligns itself with unity, personal responsibility in thought, word and deed, and the illusion of our separateness. On a more earthly level, quantum physics indirectly aligns itself with the teachings and practice of yoga and meditation.

In the movie, the frontal lobe of the brain is discussed as the “crowning achievement of the human brain.” “The alter with which we place a thought.” “It enables us to hold a thought for an extended period of time, and it lowers the volume to external stimuli to the point where we can lose track of time and space.”

In yoga this is our third eye, or Ajna, the sixth chakra, located at the eyebrow centre. Ajna is the energy centre of intention, intuition and creativity. Funnily enough, a similar hypothesis to neuroscience in the study of this part of the brain, further bridging the gap between science and spirituality.

“What separates us from all other species is the ratio of the frontal lobe to the rest of the brain. The frontal lobe is an area of the brain that is responsible for forming intention, for decision making, for regulating behaviour, for inspiration, it is the seat of what causes us to take information from our environment and process it and store it in our brain to make decisions and choices…” In conclusion, in order to create change, evolution of self, and beyond, we need to abandon our old self, and all that we have known up until this point. We have to leave behind our identity, the mask we carry around with us for a few moments, and begin to speculate who we could be, our own potential. Our potential, being as vast or as limited as our own imagination and thought processes.

“The really enlightened person will know that every action has a reaction with which i must deal with. And if I am wise, I’m not going to do stuff that will cause me to have to face it, resolve it, and balance it in my soul later.”

We can believe what we want, and call each other crazy until the cows come home but let’s face it, science now confirms that energy is contagious, and that separateness is now the biggest problem of the human condition. Quantum physicists are now saying out loudly and proudly that the deepest level of truth uncovered by science and by philosophy is the fundamental truth of unity, and that at the deepest level of our reality, you and I are literally one. The Namaste Consciousness is the new black.

So be careful what you wish for, think, say, do, and feel. GVO! (Good vibes only) as what we think, say, do and feel has a direct impact on the greater whole and ultimately, on our own destinies.

Peace out and get your yogi on! 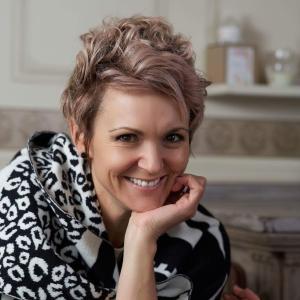 Her philosophy is born of a twenty plus year love affair with Classical Yoga, and the Chakras, combined with a diverse background in human movement, theatre studies, music, and philosophy.